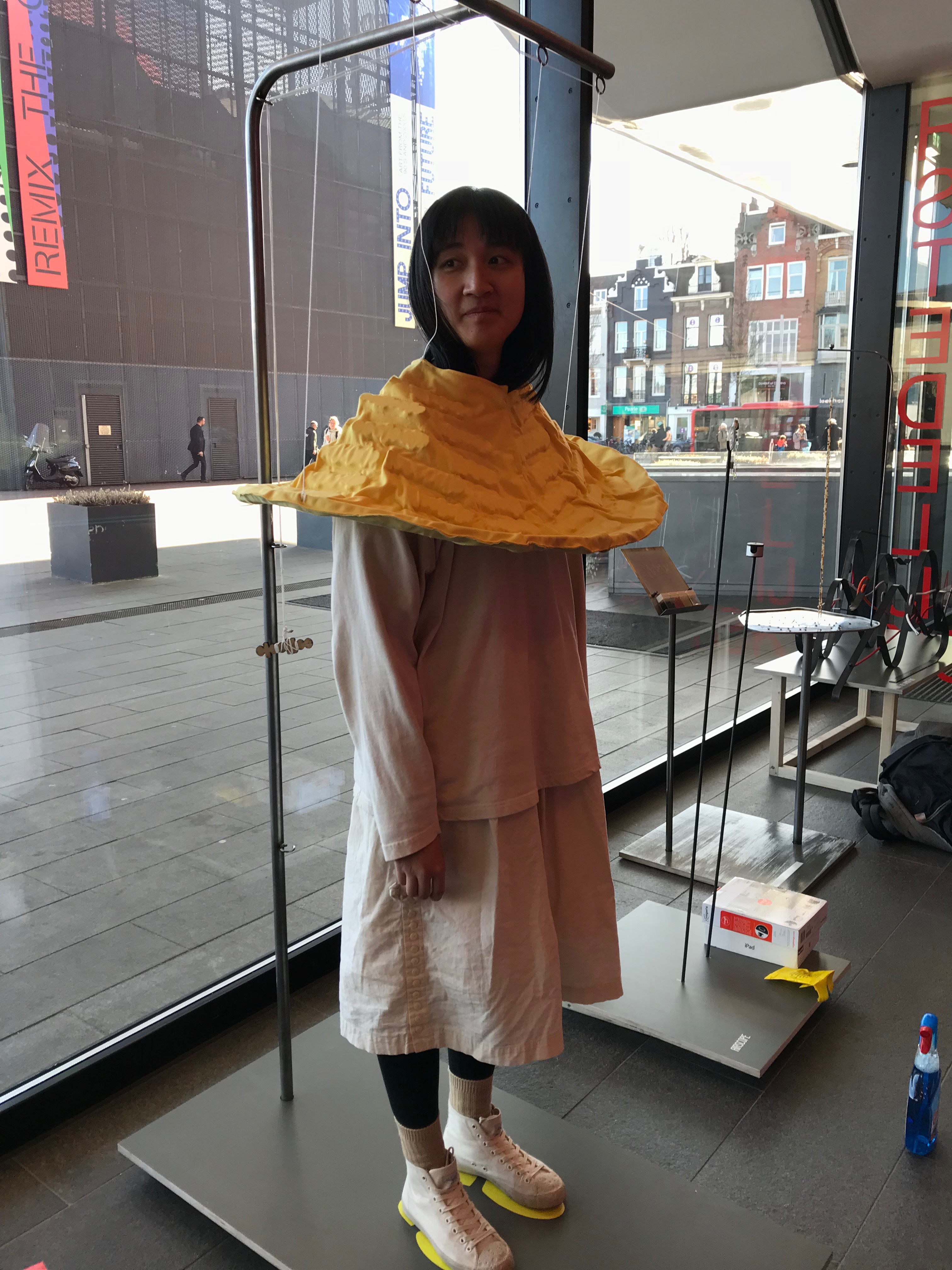 What role can touch and being touched play in multidisciplinary research fields if written and spoken language is an inherent limitation to communicate about and with such activities? How can we use physical, haptic and speculative objects to connect artistic and scientific research?Starting from these questions, the students from the DesignLAB & Jewellery — linking bodies departments of the Gerrit Rietveld Academie ( GRA ) worked in connection with eleven different scientific projects of PhD–researchers from Wageningen University ( WUR ). Together, they collaborated and developed over a period of two months portable conversation pieces that trigger curiosity, invite touch, and aim to communicate through the senses, in an effort to open up a dialogue, facilitate feedback and create new perspectives on scientific research.

Artists and scientists have a lot in common: they experiment on, reflect on, explore and wonder about the world around us. Fascination and curiosity are the basis of artists’ as well as of scientists’ practices. At the same time there are differences, in styles of working, in the ways in which the outcomes of these forms of research are interpreted and evaluated. The intention of this Cross – Pollination project has been to trigger an exchange of insights between artists and scientists and to learn from each other’s perspectives and daily practices. We have been curious to investigate if a portable conversation piece could link artistic and scientific research, if it could foster imagination, facilitating a compelling dialogue and if it could allow reflecting on the way we look at the world through our senses. At the end of this exchange process, a work of art, a piece of research or an intervention were presented by art/design students as well as PhDs, informed by and responding to the focus and interests of both. 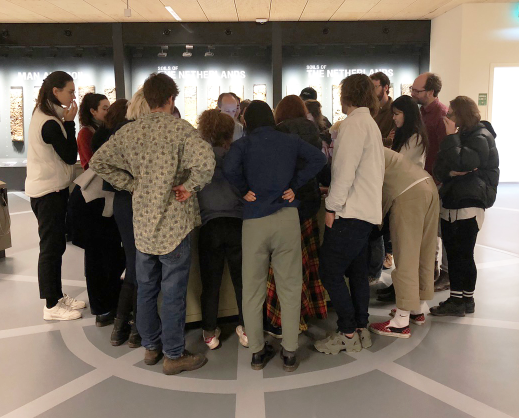 The Studium Generale program “Hold Me Now – Feel and Touch in an Unreal World” contributed to strongly inspire the project’s outcome, providing also the teams with the opportunity of presenting the resulting works in the framework of Rietveld Uncut 2018 at Stedelijk Museum Amsterdam. 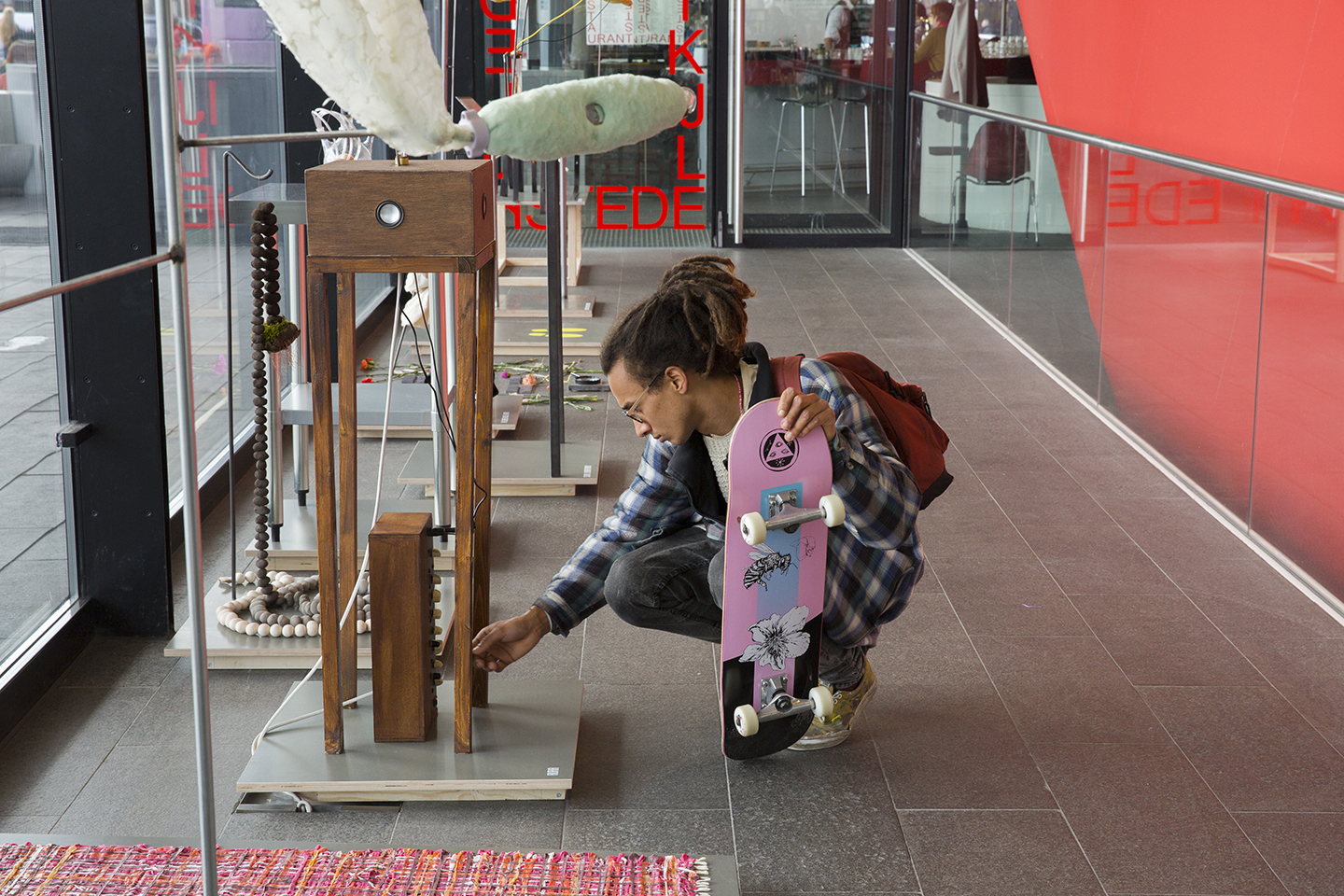 Photo above and below by Marta Capilla Urbano 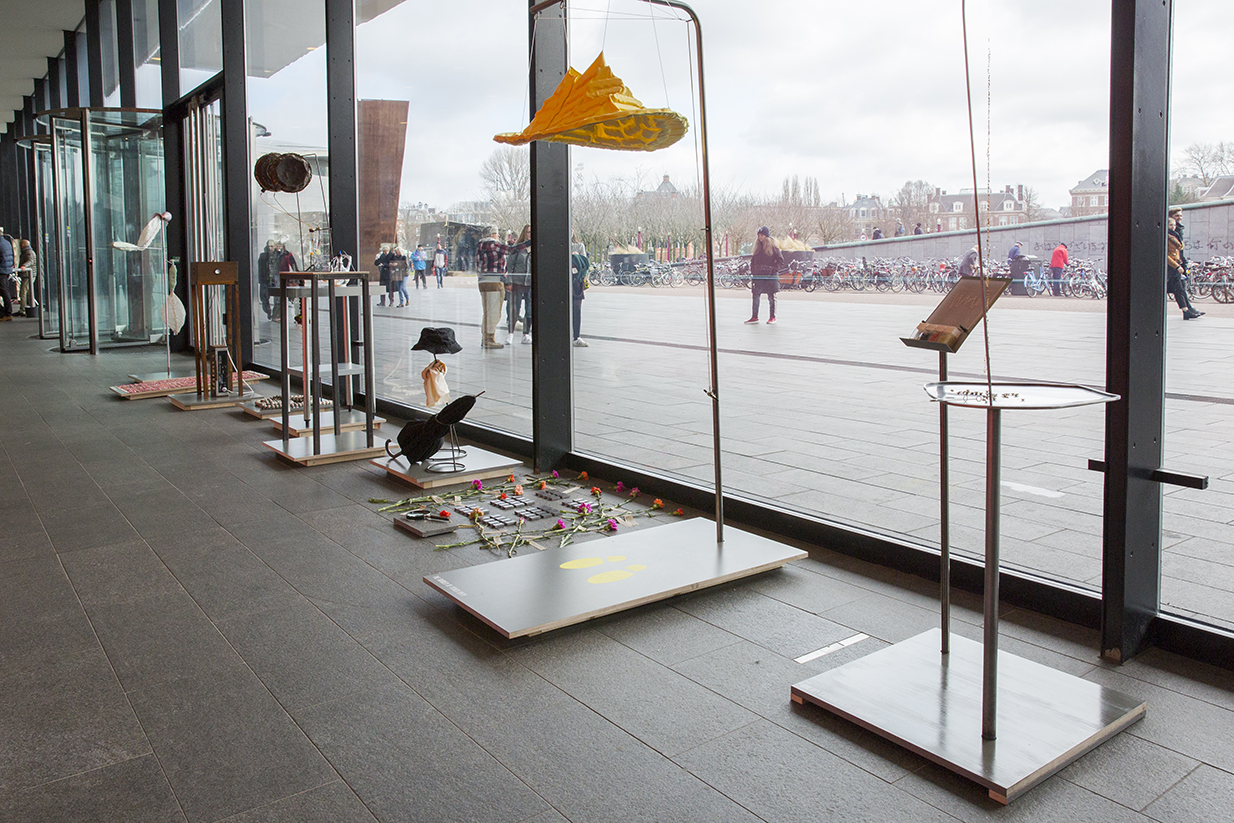 The show was then followed by a one – day – presentation at Wageningen University, where next to a tangible presentation of the artifacts, the students presented their individual projects, triggering a dialogue within and beyond each group and collectively reflecting on their experience, process and larger exchange. 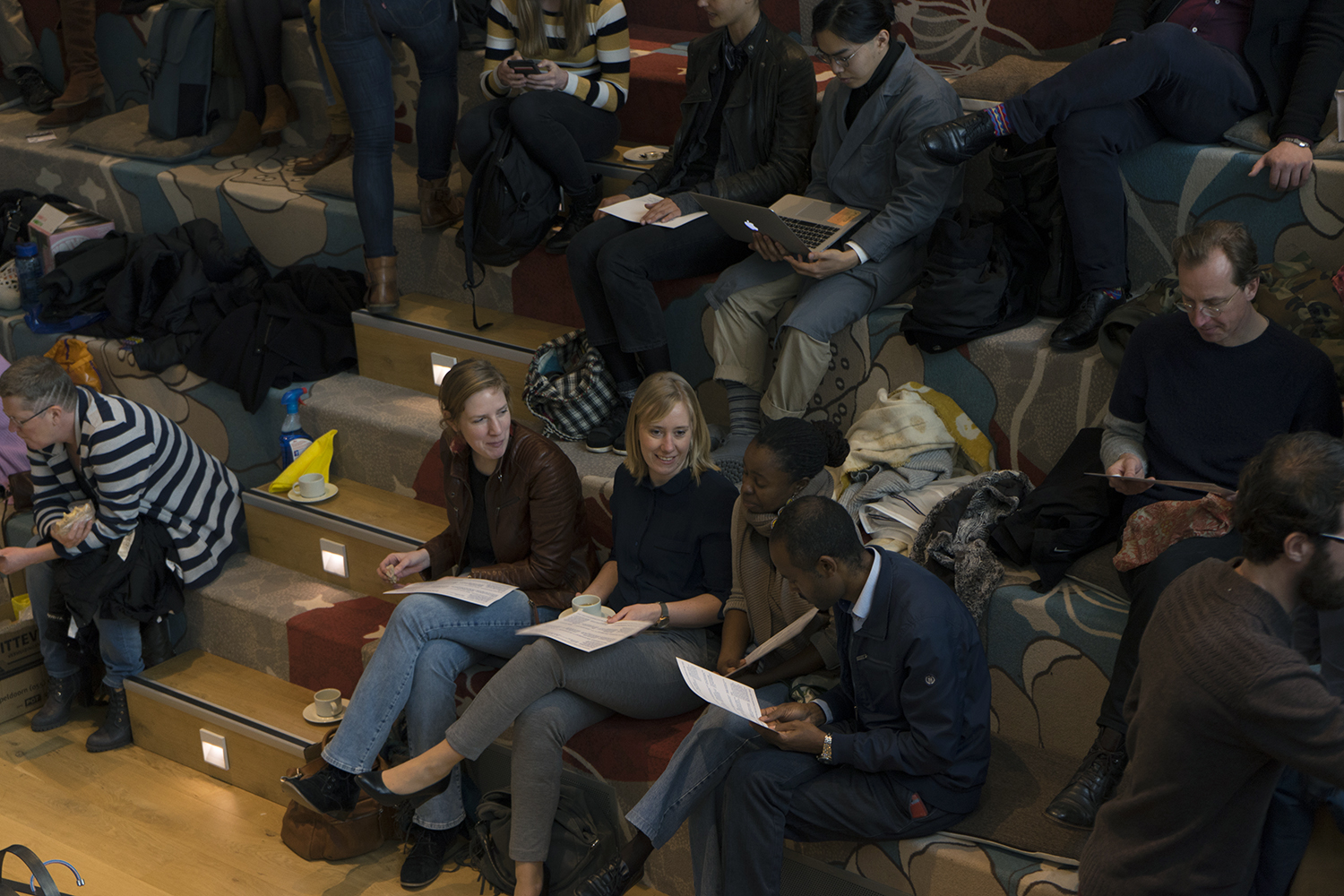 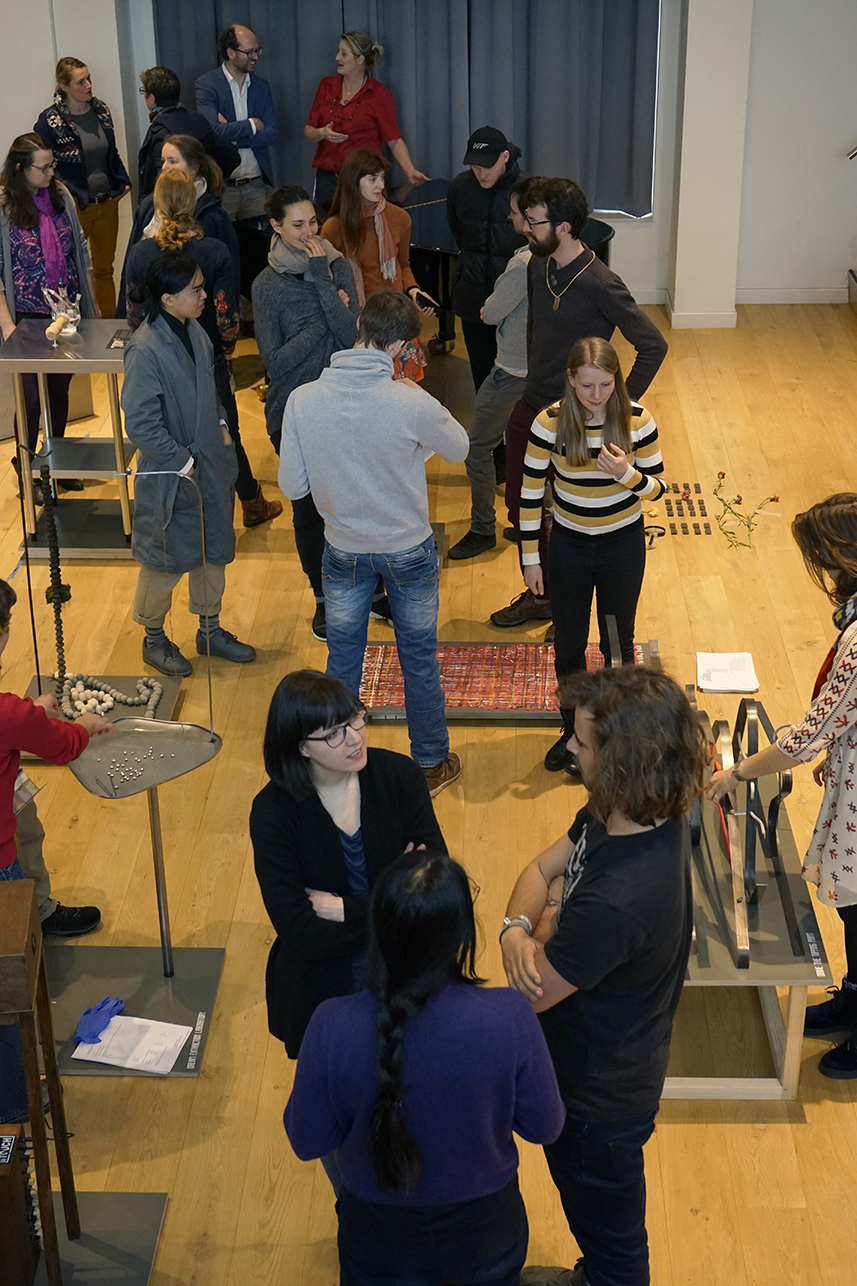 Not only has this been a valuable experience for our students, but also for the involved PhDs, who evaluated it in a highly positive way. 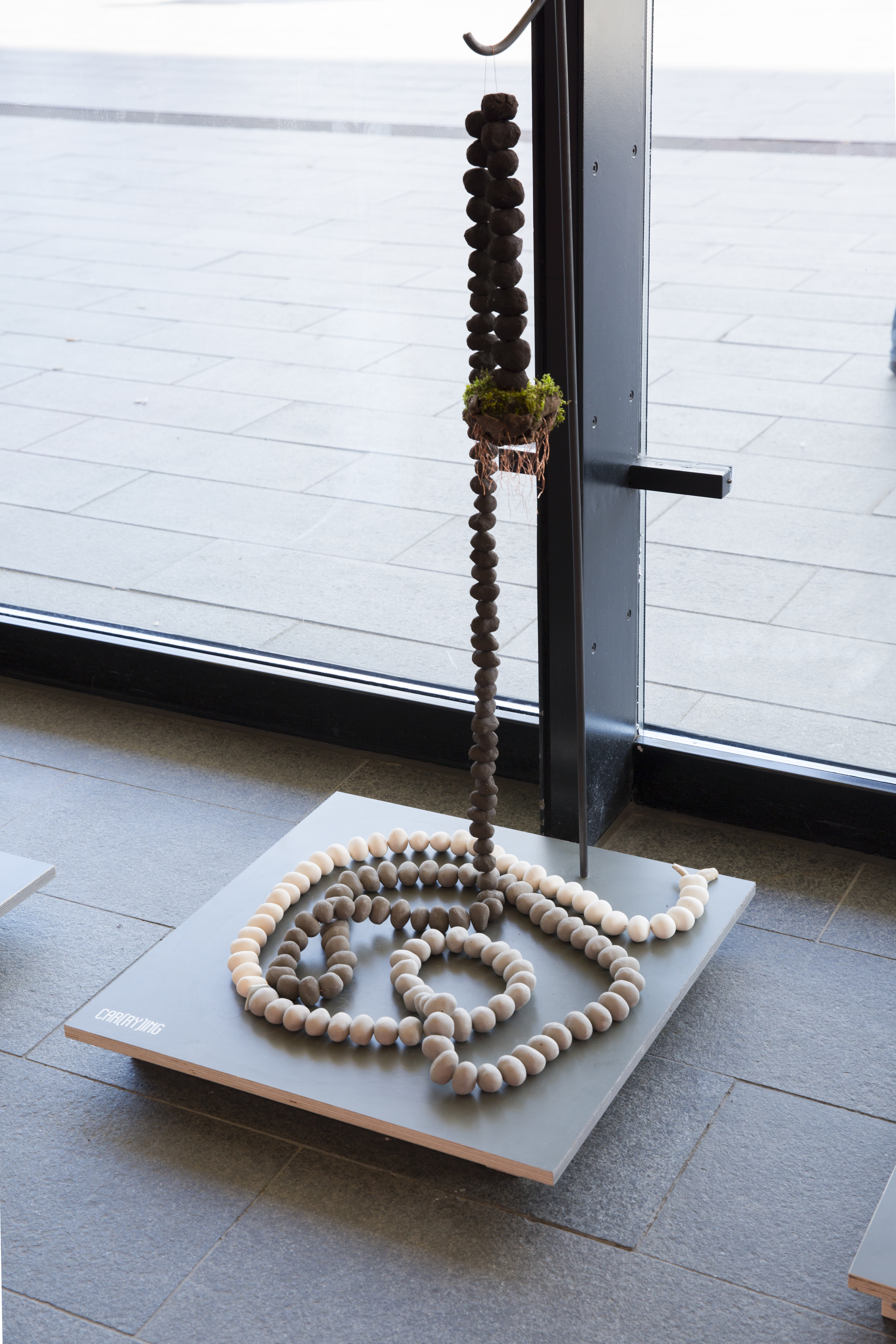 Car(ry)ing starts with pieces of different qualities of soil,
refined into gem-like stones, repetitively stringed together,
so that they become one object, which can be worn and
carried around the shoulders. Its weight refers to the
importance of the responsibility we have to carry and
care, either as a burden ( dead, destroyed soil through
human interventions: burnt, dried–out ) or a delight
( fertile, healthy: blooming ). 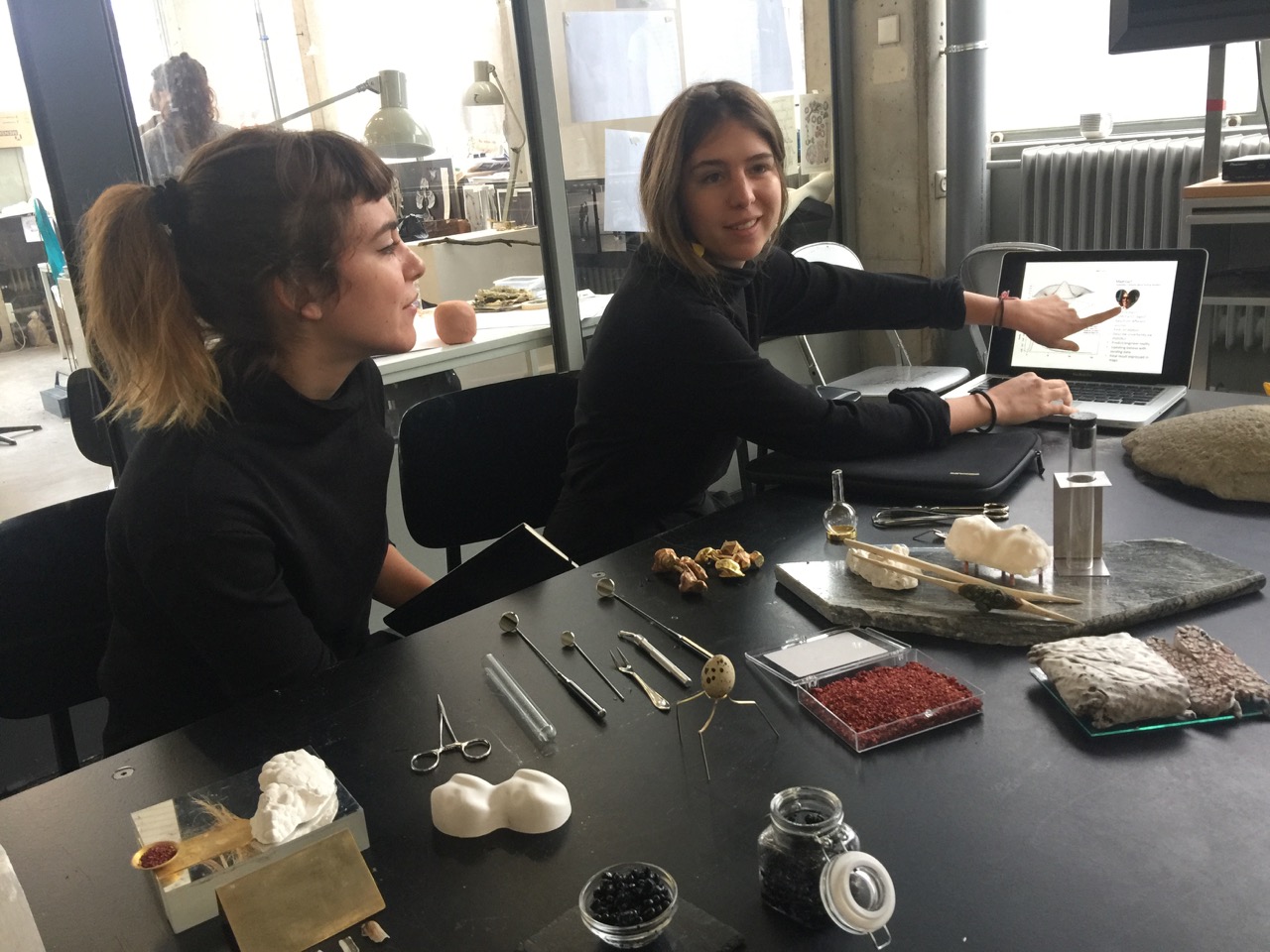 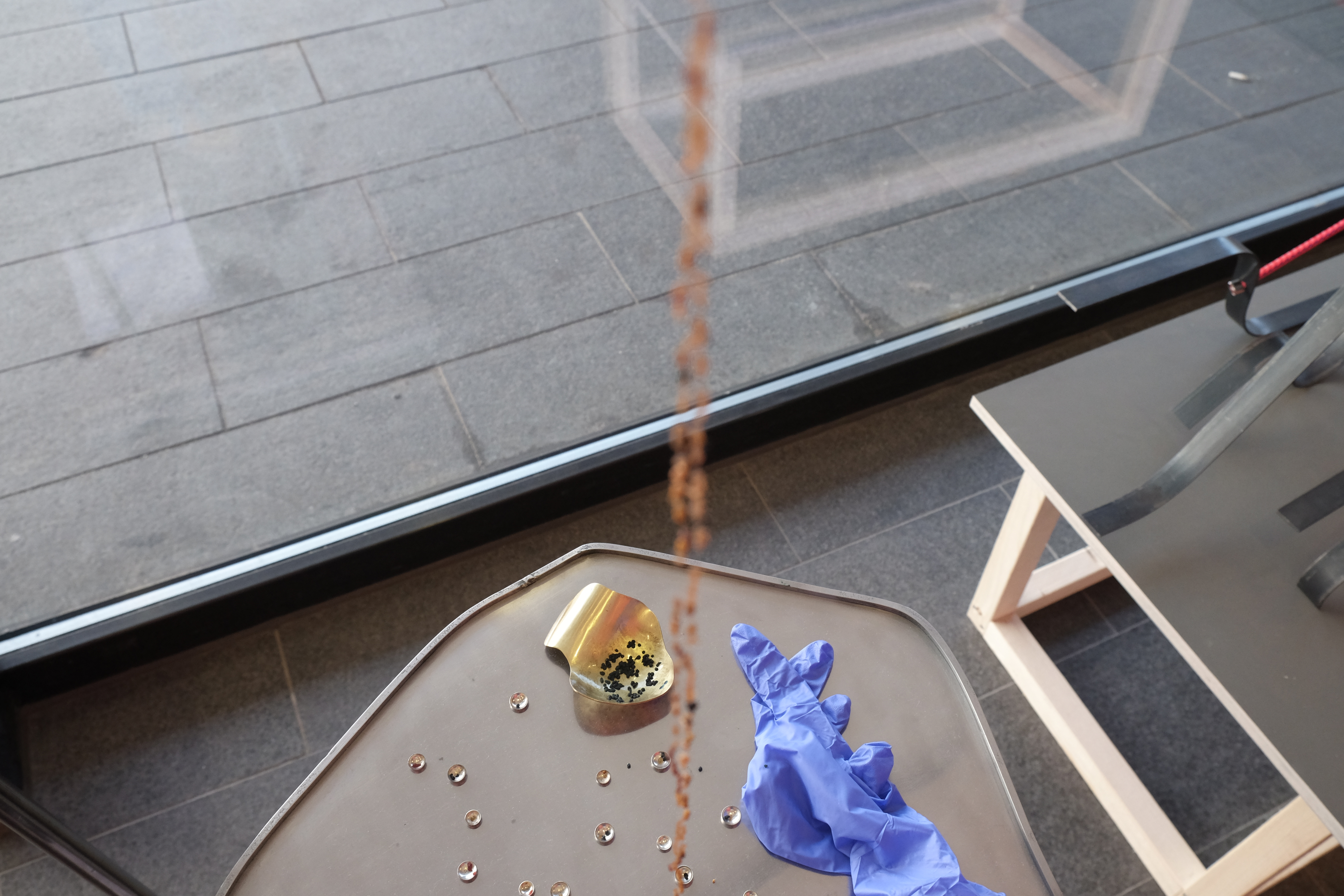 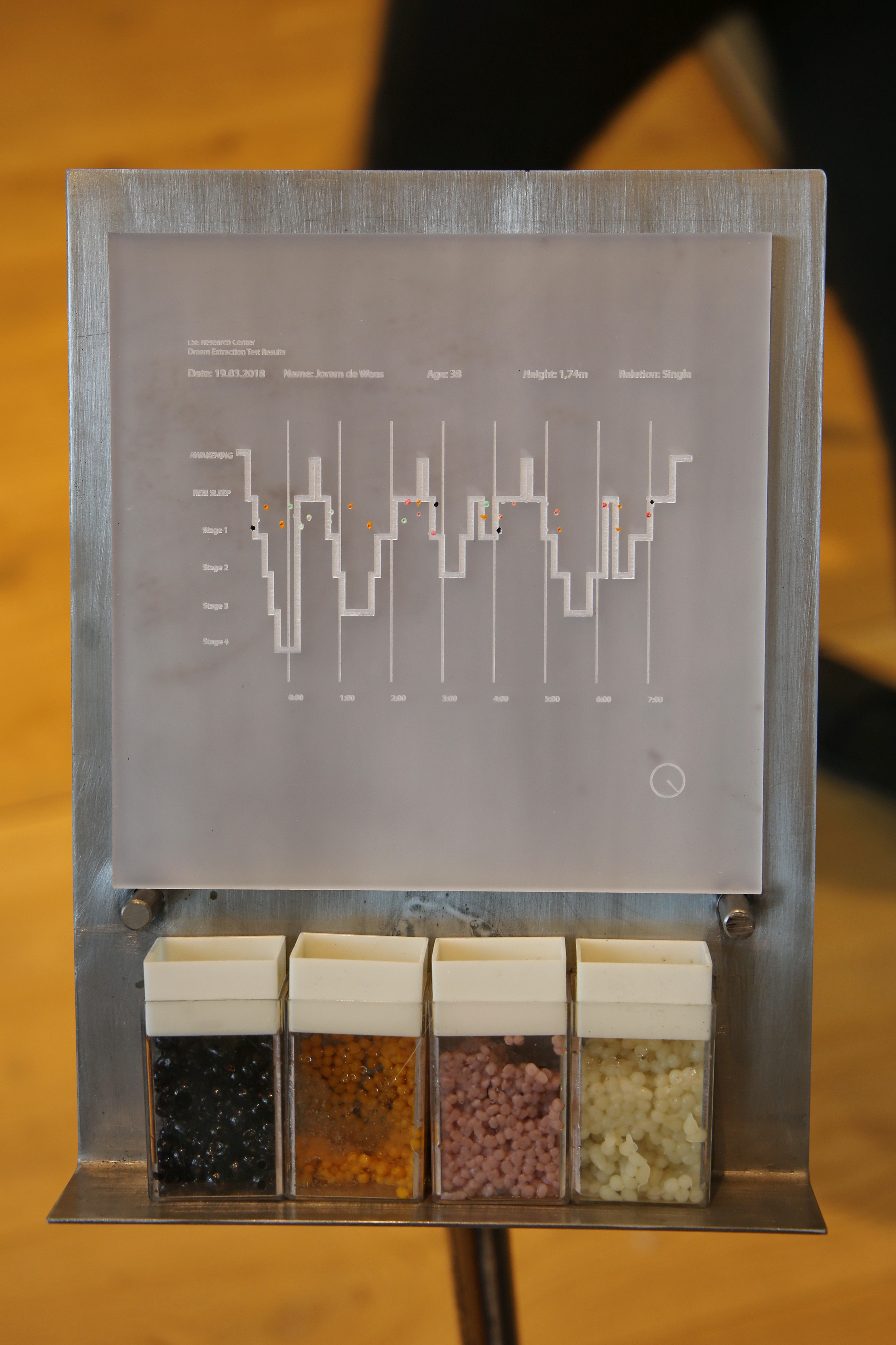 What if contemporary society would be able to perceive someone’s dream through the sense of taste? The project presents a speculative scenario in which we analyse the Hypnogram of a test person (Joram d. W.). Through a series of test variables, the collected data is transformed into edible formulas. These formulas are then offered as small tastes, offering the public the ability to get an insight into the unconscious of Joram d. W., and thus promoting an alternative sensitivity for our unconscious states. 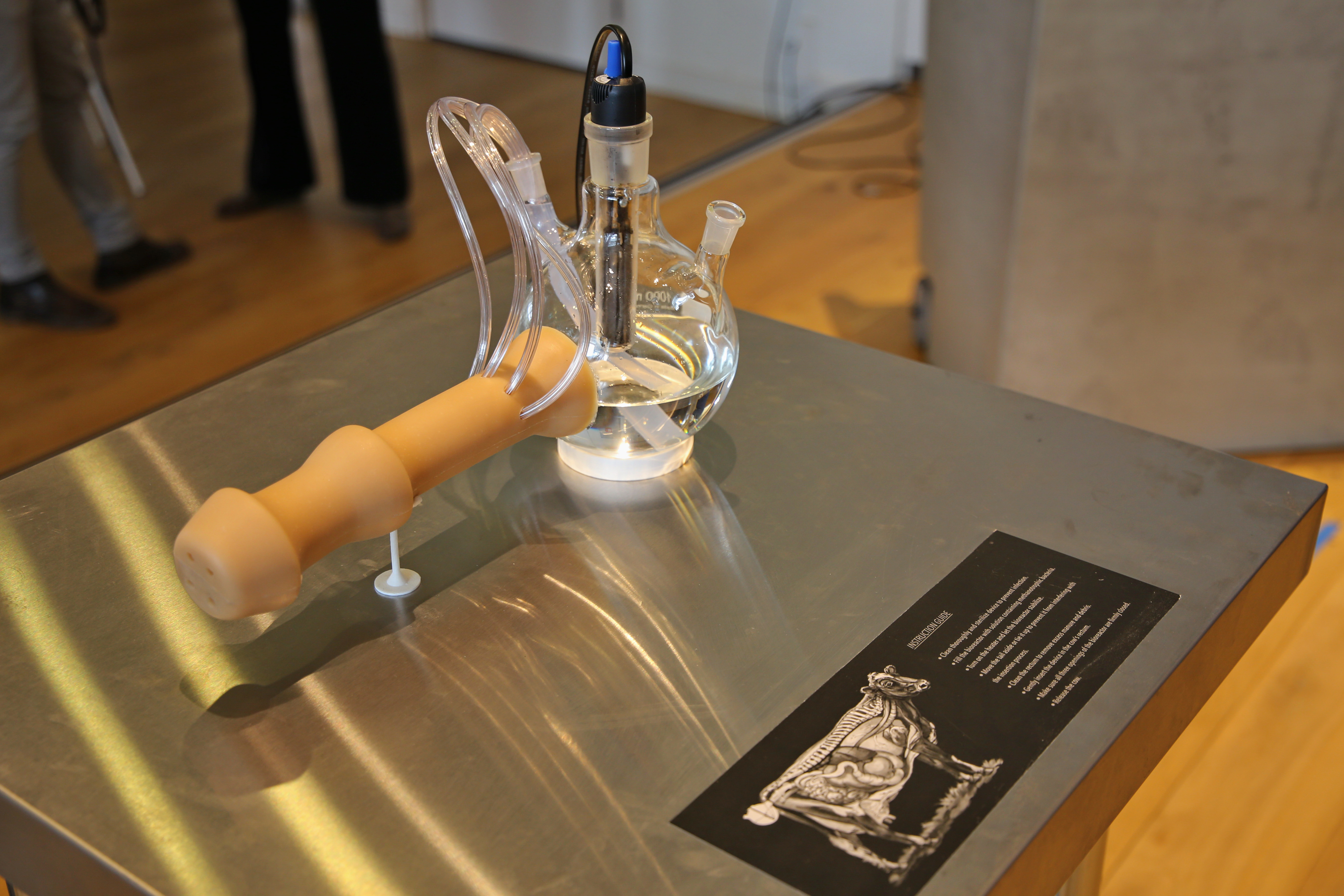 A prototype for a device that would be inserted in a cow’s rectum to extract the methane from its emitted gases. 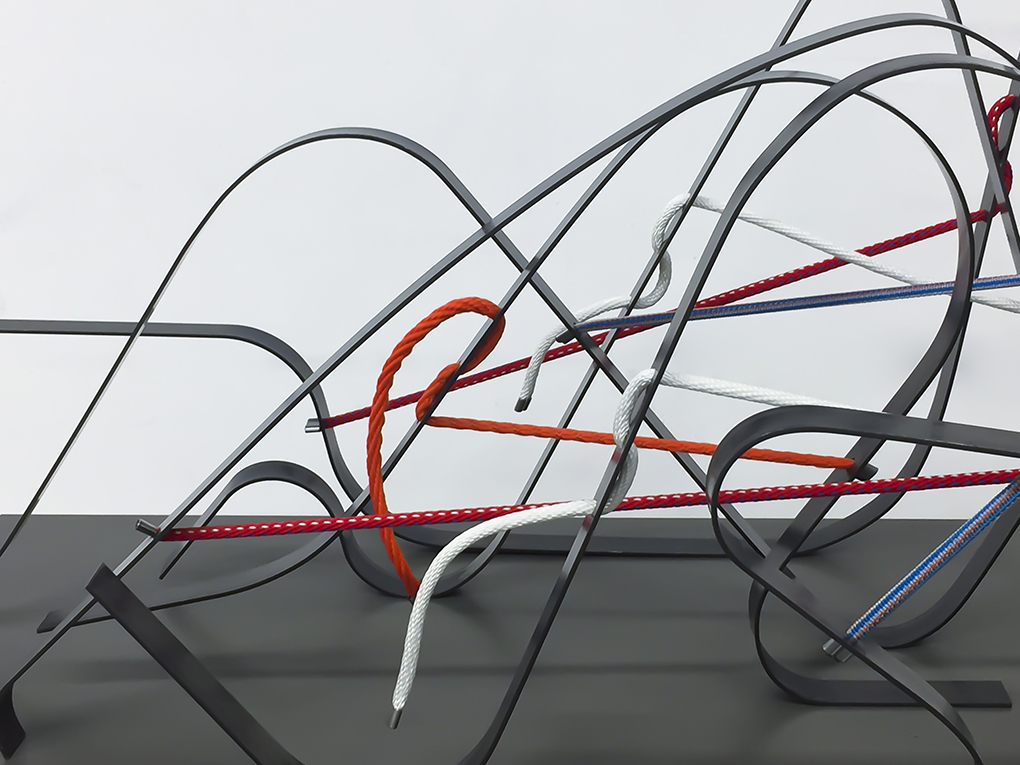 The project aims to point at the intersection and distortion between theory and reality. Following this, it asks and points at the drivers that cause such
distortions.

Our starting point came from thinking about the bytes of things in our digital storage. Any Apple product shows a break-down of GB in its storage, and between all this data, a mysterious ‘other data’ shows up! To bring this to light, and to have people physically feel their ‘other data’ that they carry around, we have translated these GB into a weighted cloak consisting of heavy binary code. 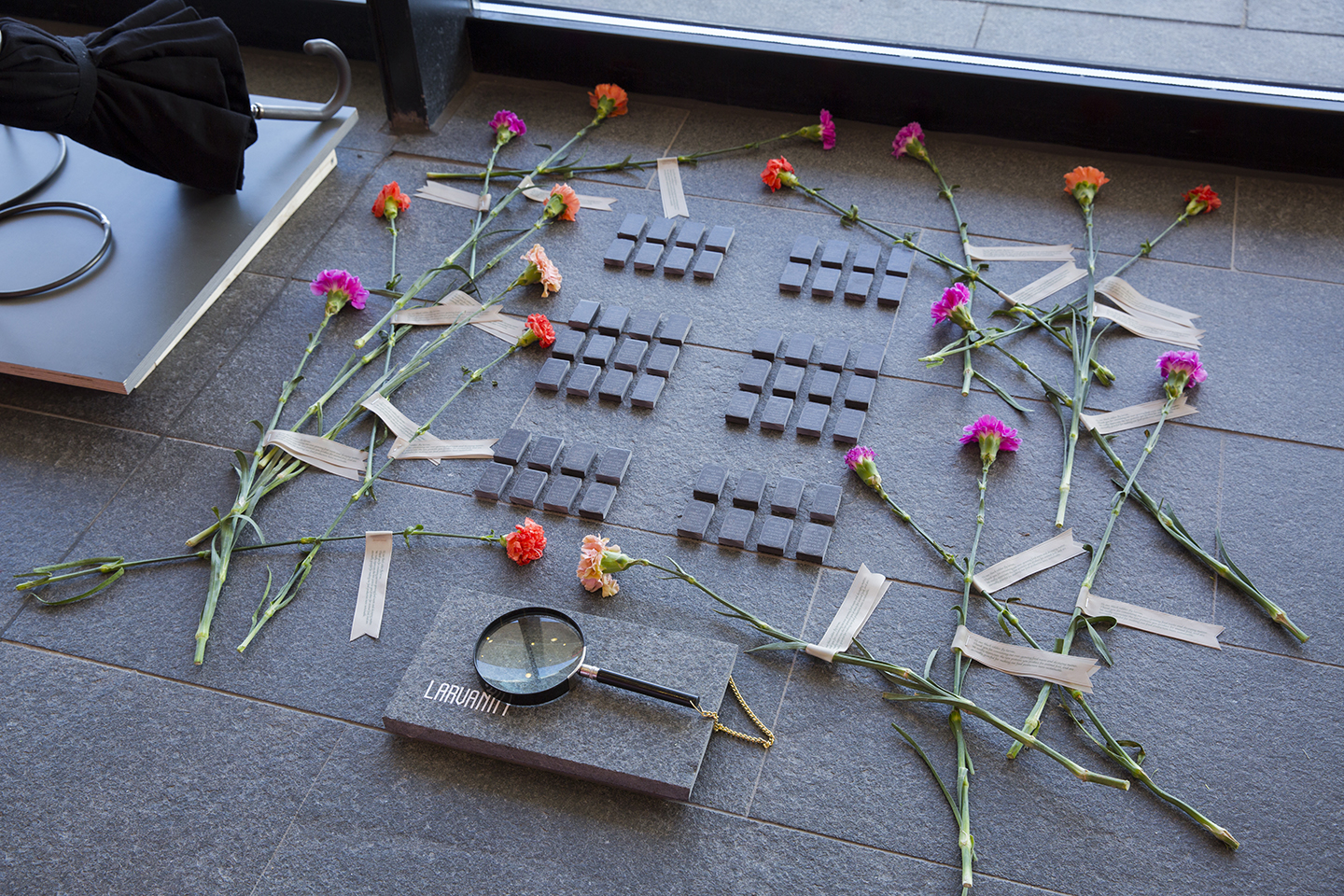 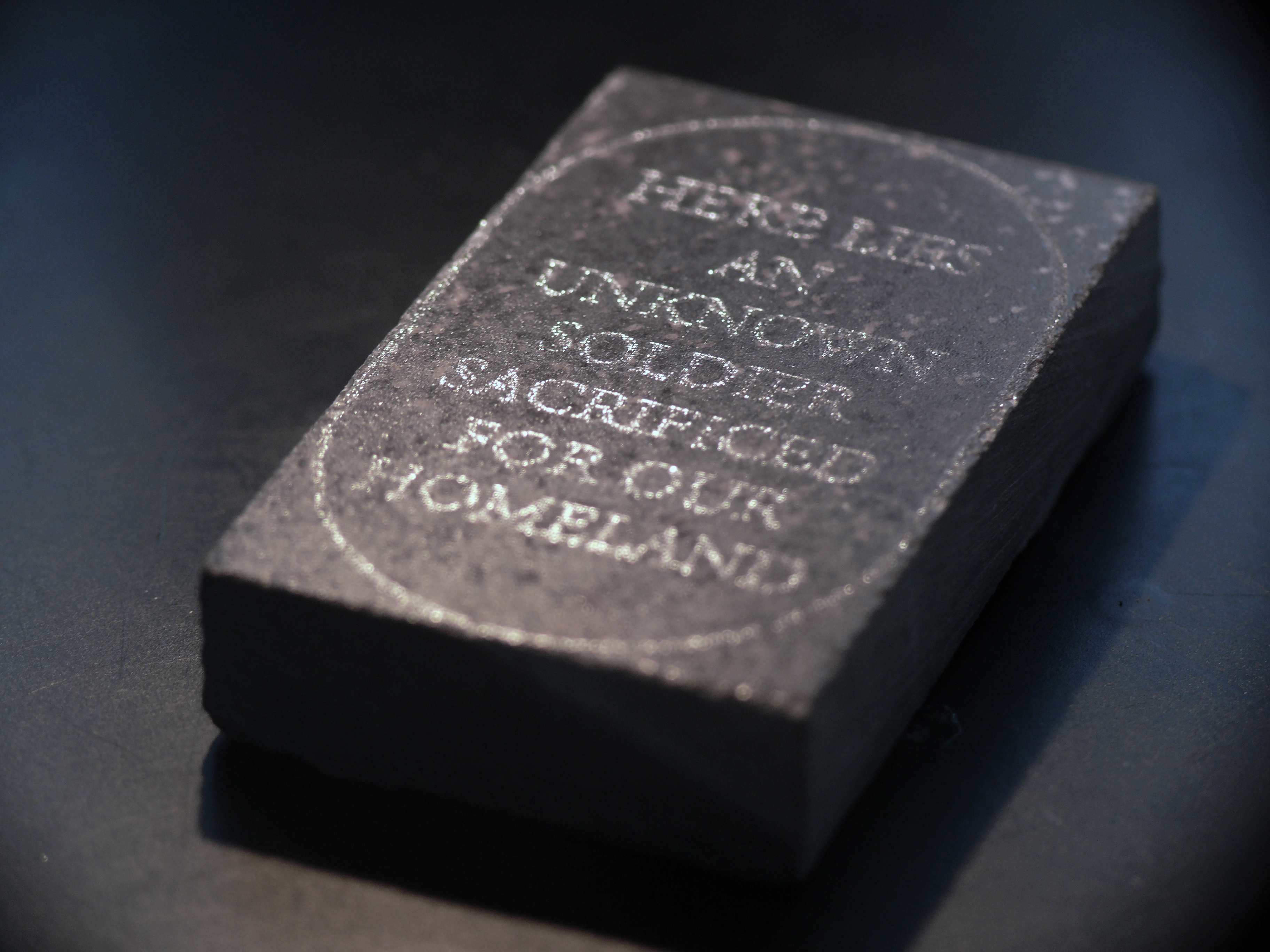 Our project is concerned with the recognition of the black soldier fly larvae, for the important role they play in our food production and waste process. To this end, we chose to make a memorial on behalf of the unknown, dead, black solder fly larvae. 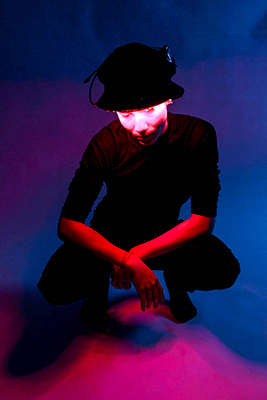 New research shows that red, far-red and blue-light from low energy cost LED’s can make plants grow faster and taller in a shorter amount of time. What if this also works for humans? Can we grow humans like we grow plants?

The project is inspired by the fundamental principles of MRI and its underlying technology. The idea is to create aninteractive installation to invite people to be aware of the existence of human’s electromagnetic field by sound. 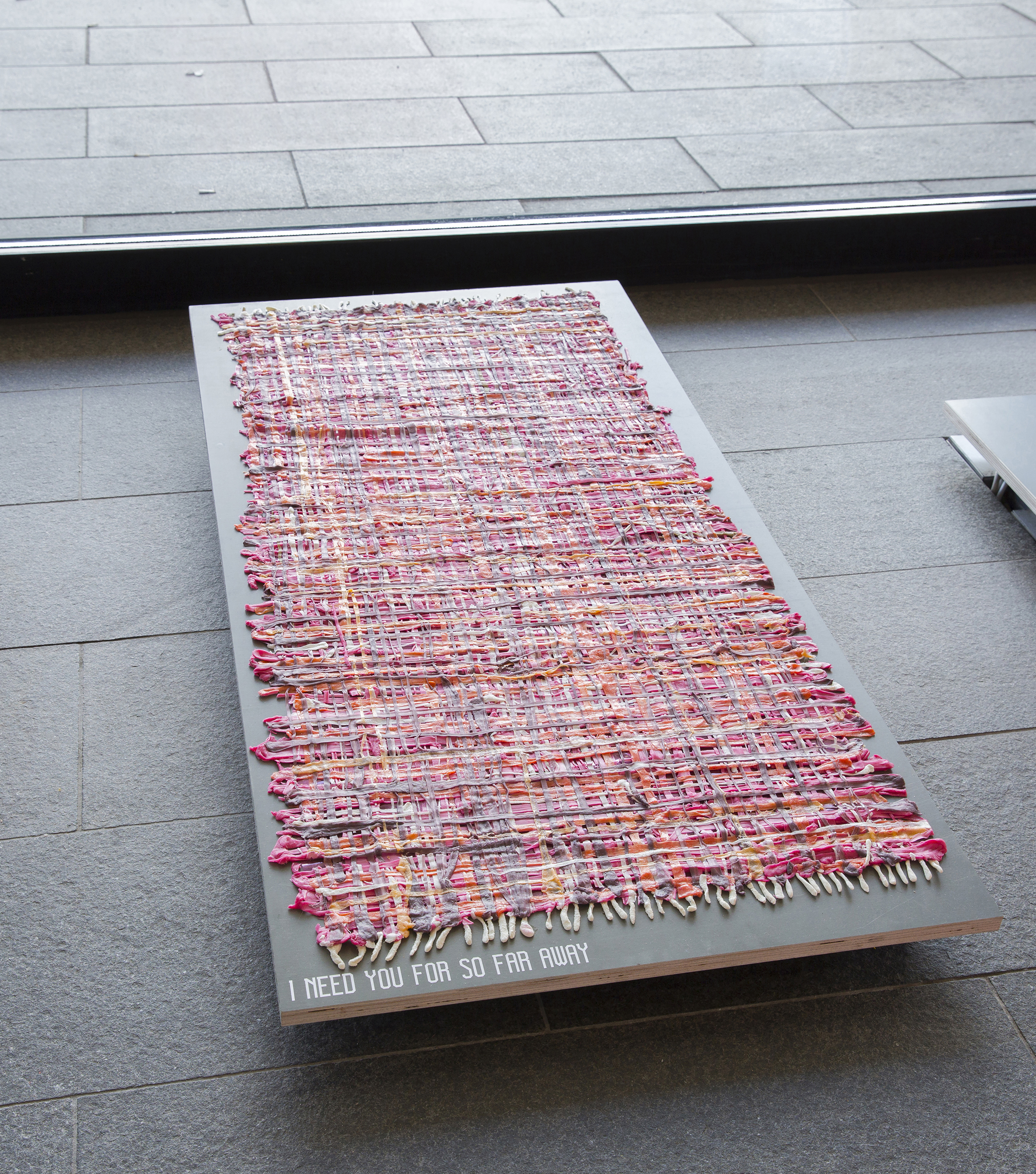 Our project proposes a passionate yet painful relationship between the leftovers of humanities unknowingness and the fruit of nature. 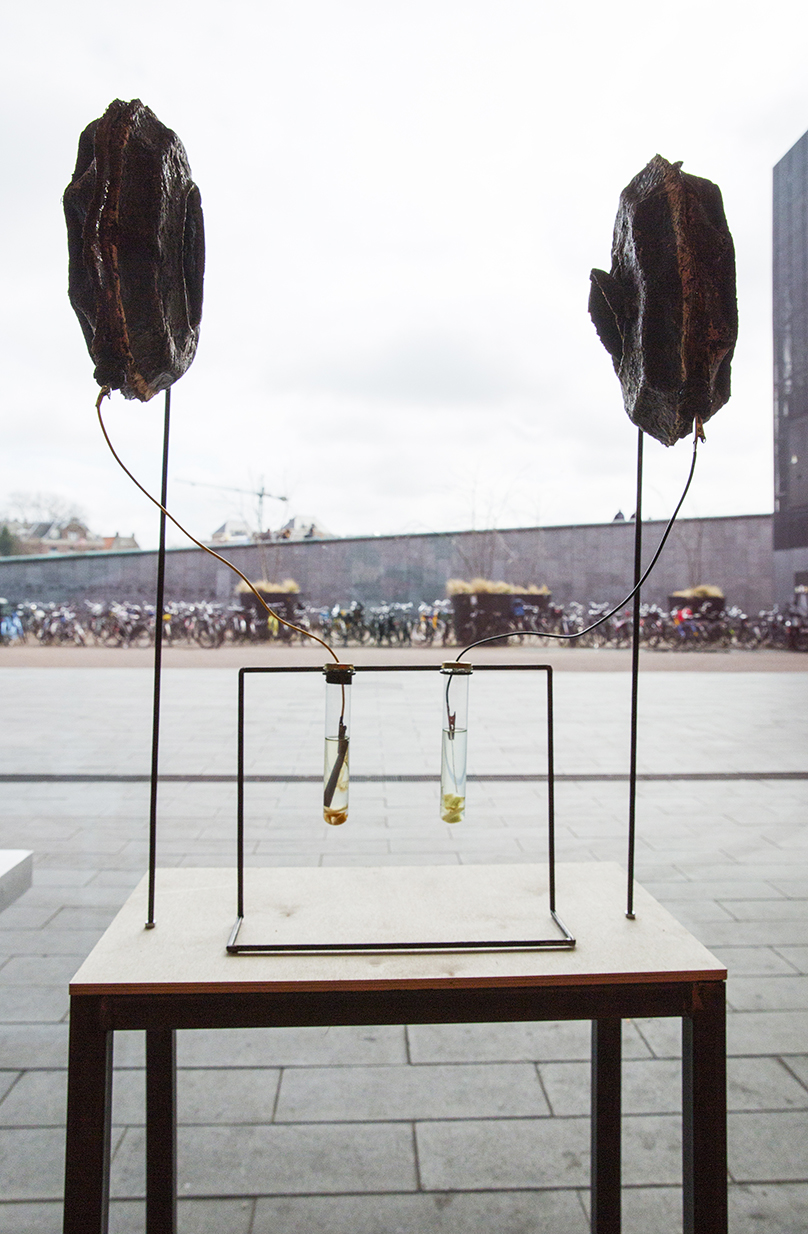 An experimental research about the sensory experience of bacteria, something which can seem unreachable to humans due to their microscopic scale. The Sound Laboratorium translates the data of bacterial growth, into a sound experience. 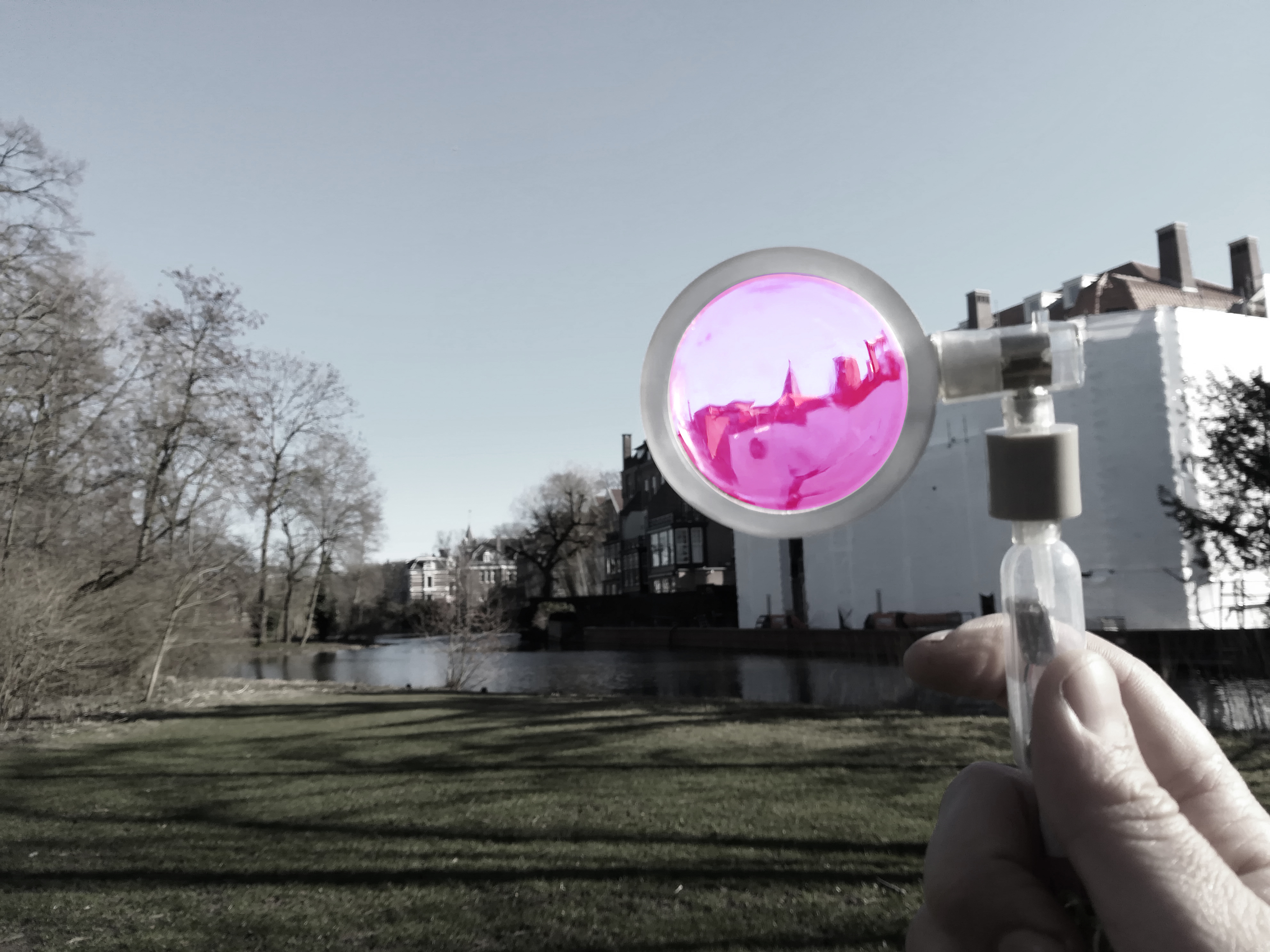 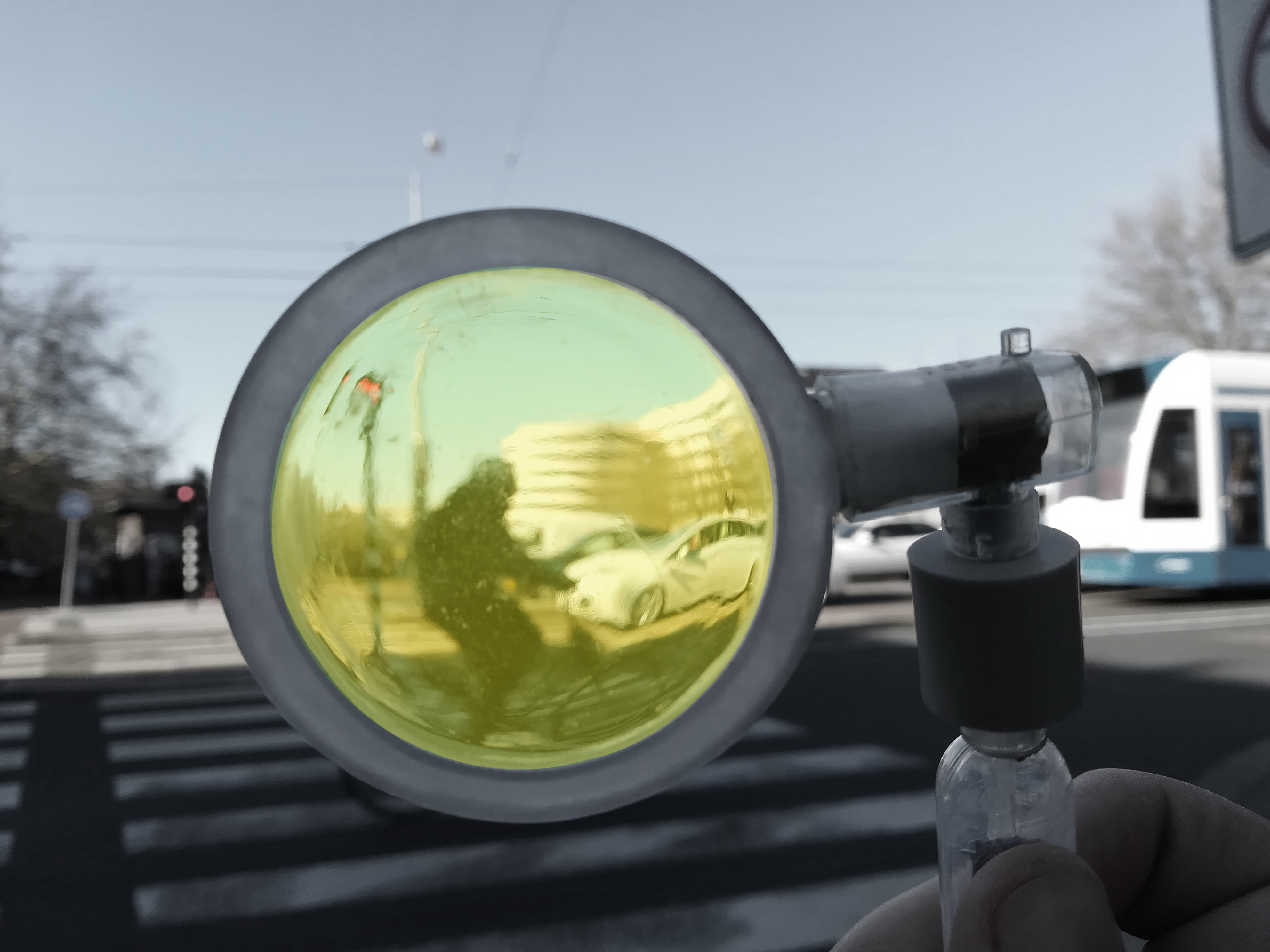 Air pollution is an important issue which is becoming more and more crucial for us to face. For this to happen though it is crucial that citizen awareness increases about more sustainable behaviours and habits to improve air quality on a daily basis, both indoors and outdoors. But how can we recognize air pollution and contribute to such a change if most of the times we can hardly sense it due to its invisibility? An imaginative tool helps us visualize the quality of the air thanks to a special lens that changes colour according to the level of pollution around us. 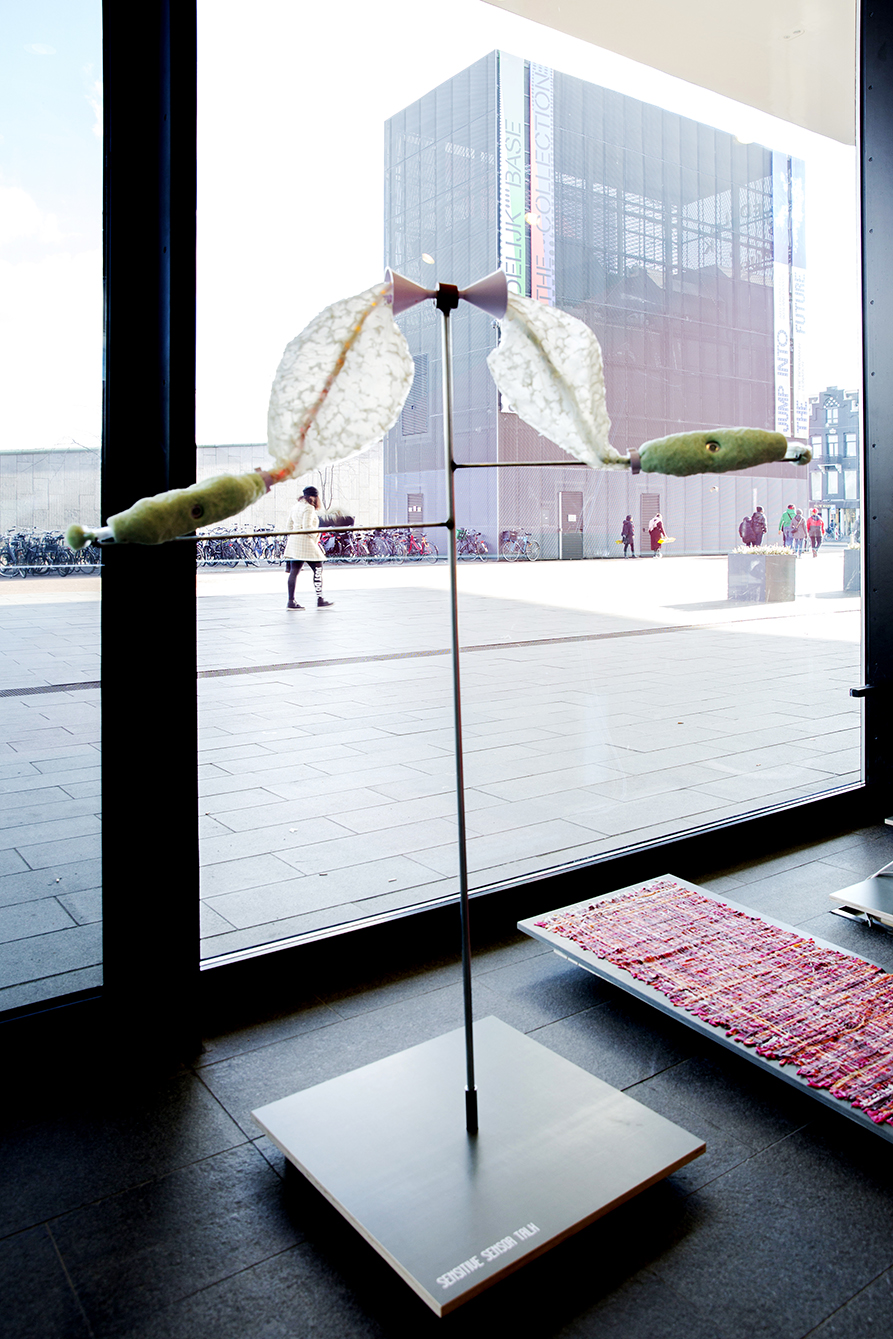 This project offers a non – verbal communication tool that allows us to get to know each other beyond words, through information indicated by the human body.